Why Electric Cars Are Not a Fad 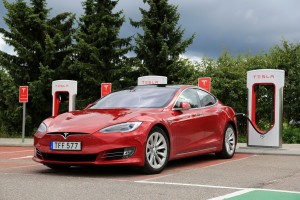 Electric vehicles, or EVs, are not new to us. They've been around for decades. Even now, when gas prices are low, EVs are selling well. This is, in part, due to the surging popularity of Tesla and the realization that gasless power is luxurious. It's also due to the fact that EVs have proven themselves over the years. The batteries that hybrids and electric vehicles use are now accepted as reliable fuel sources that often help drivers save money in the long run. It looks like EVs are not going to disappear any time soon, for lots of reasons. Here are a few.

One of the limitations of EVs has always been speed and acceleration. Elon Musk, the founder of Tesla, has worked to prove that EVs can compete with the fastest gas-powered sports cars. His latest creation, the Model S P100D, reaches 60 mph in only 2.4 seconds. That's as quick as a Bugatti Veyron! The new Model S P100D has a range of over 300 miles, in addition.

Tesla isn't the only E-sports-car manufacturer, though. Most traditional luxury brands have started making EVs. Let's be serious. EVs are not far from being able to compete in Nascar!

As we said before, drivers aren't as skeptical about EVs anymore. We expect auto batteries to last at least eight years or 100,000 miles. Thanks to the popularity of the Prius, over the last 12 years or so, we know that EVs are as reliable as gas vehicles. We also know that they often help drivers save money in the long term. Although, the industry is still trying to make them more cost effective. Some small gas vehicles are still cheaper to own and operate than EVs.

Environmental impact may be the biggest problem with EVs, actually. Some experts think that, even though it's harmful to the environment to produce EVs, it's less harmful than all of the emissions and the production of gas vehicles. Time will tell how well we can reduce the impact, or if another fuel source (e.g. hydrogen fuel cells) turns out to be better for the Earth.

In case you haven't noticed, there have been some strong words exchanged between climate change believers and non-believers. Whether we like it or not, the government plays a major role in the auto industry. The president elect of the United States isn't the "greenest" we could have hired. It's almost certain he won't direct any resources or funds to alternative fuel vehicle manufacturers. That's why we think EVs have a leg up on FCVs (hydrogen fuel cell vehicles). EVs are already established in the market.

When it's time to buy a new vehicle, make sure you get quotes online. Compare them all, for free. Take a few minutes to make a no-obligation quote request here.